Apple is the most visionary computer company in the industry. Throughout its history it has pushed the boundaries both design and technology. It is the only computer company that believes that the way that technology looks, functions, and feels is as or more important than the technical specifications that make it up. It is the only company that focuses solely on the entire end-user experience from purchase, to unboxing, to the hardware, the software, and support. Apple strives to make its products feel like more than just tools that help you get the job done. I’ve been fascinated by Apple since I was a teenager. Its products and ideals just work for me. The purpose of the Mac Museum is to preserve a physical and virtual history of Apple and its products.

The Mac Museum is a collection. Just like a stamp, coin, or baseball card collection, the motivation behind the Mac Museum passion – I love Apple products. Some people keep a collection in order to amass monetary  value. That is not my motivation. It is simply to own the Apple products that I love and share their history with others. Over time they will accrue some value but I’m not in it for the money.

The Mac Museum focuses primarily on Apple’s Macintosh era that began in 1984.  There are some Apple II-era artifacts, but the main focus is the Mac, its accessories, and Apple’s later products. This includes keyboards, mice, monitors, microphones, Newtons, iPods, iPhones, iPads and software. My goal is to physically own a representation of each of Apple’s major product designs. In addition, I want to own software from the time that the Macs in my collection were current. This includes every version of the Mac OS ever released, all versions of third party application software such as Microsoft Office and Adobe Photoshop, as well as commercial, shareware, and freeware utilities. The museum doesn’t stop with just hardware and software; it also includes product packaging, documentation, and advertisements.

This site serves as a virtual companion to the physical museum. Its purpose is to document the Macs that are in the collection and to provide additional insight into Apple’s history and designs through exclusive articles. I love to learn about Mac history and to find out the details about the design, release, and usage of various Apple products. There are several sites on the web that contain this information, but it’s not all in the same place. My goal with the website is to tell a story about the products I love with detail and photos.  In addition to its products, I want to convey Apple’s history through a series of articles about the company throughout the years. The site is not only a way for me to express my affection for Apple but also to exercise my interests in writing in photography. I hope you can share it with me.

I’ve been collecting equipment since late 2011 and have added quite a bit since then. Here is a summary as of August 2017:

The museum is located in my basement. It is more of a private collection than a public one at the moment. Visitors are allowed, but usually they are people that I know who are already at my house for some other reason. At some point I’d like to have a better place to display them but for the moment they are relegated to a small corner of the basement. Space is a constant battle, but I’m doing fine so far.

Below is a collection of images from my museum to give you a sense of what I have and how it is displayed. Click on each photo for a detailed description. 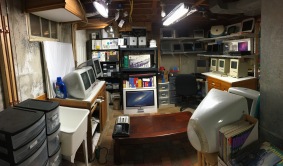 “The Annex” – spilling over to the other side of the basement 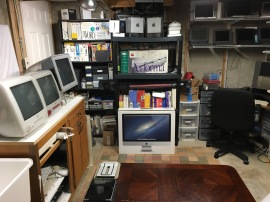 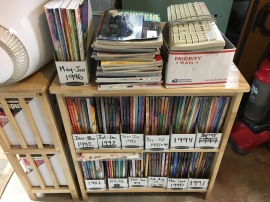 3 Replies to “About the Museum”