Apple entered the portable computer market in 1989 with the Macintosh Portable. Essentially a Macintosh Plus with an LCD screen, the Portable was an utter failure due to its clunky design, high price, and poor performance. Apple went back to the drawing board and re-entered the market in 1991 with the PowerBook, which set the standard for notebooks in ways that still influence them today. It’s biggest contribution to the notebook design was its palm rest with a centered pointing device. If you think about it, almost all laptops still use this design today. Competitors placed the keyboard at the front edge of the case, leaving the user without a place to rest their palms and leaving no convenient location for a pointing device.

Since its introduction, the PowerBook has set the standard for notebook design. In 2006 the PowerBook name was retired and replaced by the Intel-powered MacBook, and with it the PowerBook’s influence lives on. This is the first in a series of articles that chronicle and celebrate the major designs of the PowerBook through its retirement in 2006. Apple has always been known for its design and the PowerBook is no exception.

The 100 series of PowerBooks spans nine models and was in production for four years. Their cases are made of gray plastic and have a thick boxy design. All models include a trackball pointing device with a button below as well as above the ball. The second button does not operate as a second mouse button however – Macs were still one button machines at the time. Models include 9 or 10 inch screens in varying mixtures of bit depth (black and white, grayscale, color) and technology (passive-matrix or active-matrix). The screens are surrounded by one or two inch thick bezels, making them look tiny, but at the time they were as large as screens on competing notebooks. All models are driven by either Motorola’s 68000 or 68030 series of CPUs and include internal hard drives with between 20 and 16o MB of storage. Most include a floppy drive as well. Battery life is around 2 hours except on the color models which barely make it to 1 hour. 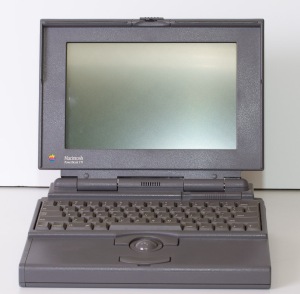 Initial reviews of the first set of PowerBooks were favorable. Reviewers were happy to see replacements for the failed Macintosh Portable that were light(er), cheaper, and faster. Main complaints were the lack of color, lack of video out, keyboard size, keyboard feel, and screen refresh rate. These criticisms were not specific to the PowerBook line and were shared by many notebooks at the time.  Performance-wise, the  top-end PowerBook 170 met or exceeded the performance of similarly configured PC notebooks from AST, Compaq, and Everex with Intel 286 and 386 CPUs. The PowerBook 140, which lacks a math coprocessor, was slower than all of the PC notebooks, while the PowerBook 100 was only faster than the Macintosh Portable at the bottom of the pack. The first PowerBooks were a success for Apple, winning awards from magazines such as Fortune, Time, and Business Week, and selling almost 300,000 units in a span of a few short months.

By 1992 it was time to refresh the PowerBook lineup and Apple did so by releasing three new models – the 145, 160, and 180. The biggest updates were speed bumped CPUs, gray-scale screens, and video output. The 145 ($2,150) replaced the anemic PowerBook 100, sporting a much faster 25 MHz 68030 CPU, 40 MB hard drive, 4 MB RAM, and internal floppy drive.  An 80 MB hard drive was available and bumped the price up to $2,500. The 145 was essentially a speed-bumped and price-reduced version of the PowerBook 140 from the prior year and included the same passive-matrix black and white LCD. By dropping the uniquely designed PowerBook 100 Apple standardized the design of the PowerBook series. The 145 was “updated” in June 1993 with the 145b which included 2 extra MB of RAM and a lower price. 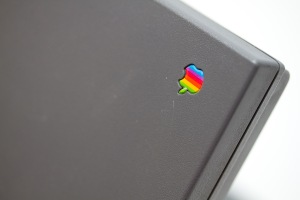 The updated PowerBooks were a solid improvement over their predecessors, but they began to show deficiencies in comparison to their PC competition. The PowerBooks did not include color screens, PCMCIA slots, or advanced power management, nor could they compete with Intel’s powerful new 486DX CPU. Even the top-end PowerBook 180 couldn’t keep up with a 486DX notebook costing $1,000 less. The DX offered performance comparable to the Motorola 68040 used in Apple’s Quadra line of desktops, but an ‘040 CPU would not be available in a PowerBook until 1994. In addition to trailing performance, the PowerBook did not include built-in Ethernet networking and was not designed to be upgradeable.

Color Me Disappointed – The 165c

A PowerBook with a color screen did not appear until 1993 with the release of the PowerBook 165c ($3,400) in February of 1993. Driven by a 33 MHz 68030 CPU, 4 MB of RAM, and 120 MB hard drive, it is the first PowerBook with a color display, but it doesn’t come without its compromises. The display is small, 9″ vs 10″ on the other PowerBooks, and uses passive-matrix technology that makes screen redrawing slow and viewing angles sensitive. It’s color technology makes it almost impossible to read in daylight, unlike grayscale and black and white displays. It requires two backlights to illuminate (as opposed to one on non-color PowerBooks), which cuts battery life in half – from two hours down to one. All of these compromises to view graphics in only 256 colors. Otherwise than the color screen it is the same machine as the 180 and inherits all of its problems including performance against its competition.

The 165c was not the color PowerBook that Mac users wanted. MacWorld Magazine cited its screen as the largest issue and only rated it 2 out of 5 stars,  instead suggesting that potential buyers wait until Apple released an active-matrix version or even consider a DOS notebook.

In June of 1993 Apple finally released a proper color PowerBook, the 180c. Selling for $4,160, the 180c included a high quality active-matrix screen at 10″. The screen was bright, crisp, and fast, making it far more appealing than the screen on the 165c.  It also contained more pixels – 640 x 480 vs 640 x 400 on prior PowerBooks – matching the resolution of a desktop monitor for the first time. Otherwise, the 180c was roughly the same as the 180c and 165c. Same features. Same performance. By this point the PowerBook line was trailing even further behind PCs with slower performance, lower battery life, and higher prices. Customers were begging Apple for a new design that would catch the PowerBook up to its PC counterparts.

The 100 Series in Summary 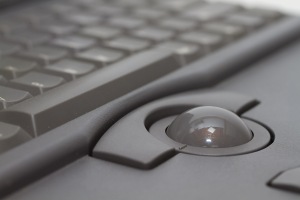 The PowerBook 100 series was released at a time when Apple was taking a beating on the performance front in both the desktop and notebook space. PC companies were releasing laptops based on the Intel 486 and later Pentium which were far faster than Motorola’s 68030, originally released in 1987. The 68030 CPU running at 16, 25, or 33 MHz was the powerhouse CPU for the majority of the 100 series models. One model include sthe 16 MHz version, three models include the 25 MHz version, and a whopping five models include the top-of-the-line 33 MHz version. In fact, after 33 MHz version was introduced in 1992, all future models included it.  The only differentiator for performance between models was the inclusion of a Floating Point Unit in high end models. The PowerBook 100 series used the same basic CPU for almost three years with little to no change in speed or design. This was due to Motorola’s inability to manufacture a version of its powerful 68040 CPU (included in the Quadra 700 and 900 series released in 1991) with low enough power consumption and heat dissipation to include in a laptop. When Motorola finally did release a 68040 CPU suitable for laptops, Apple only kept it on the market for a year and a half before replacing them it the PowerPC.

In addition, Apple made mistakes in determining what its users wanted out of a portable Mac. The first PowerBooks did not include video output or microphones and only the bottom-of-the-line PowerBook 100 could be used as an external hard drive. They also shipped with barely enough RAM to run version 7 of the System Software that shipped on them. Later PowerBooks did not include upgradeable video memory to drive larger displays with more colors. The first color PowerBook was disappointing and even the subsequent active-matrix model offered little more than a better screen. Apple also refused to include technologies that would make the PowerBook more competitive with PC notebooks such as longer-lasting Nickle Metal Hydride batteries (which Apple did use in the ultra-light Duo series), PCMCIA expansion card slots, larger displays, and more hard drive and memory options.

The PowerBook 100 series was Apple’s chance to right the wrongs it made when it released the Macintosh Portable in 1989. It did in many respects, but it quickly became stale and had trouble keeping up with its PC competition. After three years on the market, Mac users needed something that addressed their needs and put them on a more level playing field with other notebooks. Apple’s answer was the PowerBook 500 series.

What About the PowerBook 190?

In my collection I have a 1991 PowerBook 170. I purchased it in high school for around $100. By that time it was probably 9 or 10 years old, but I found it absolutely awesome. It was faster than my 8 MHz Macintosh Classic and I could take it with me wherever I went. I loaded it up with software used it for writing and drawing, even writing some essays for high school on it. It is the oldest personal machine in my collection and it still works well today.  At the time I had it running System 7.5.5 but now it has been resettled back to System 7.1.  It has XX MB RAM and an 80 MB hard drive full of classic games and productivity applications. Its one major problem is that the LCD is starting to fail. After about 10 minutes of use the screen begins to darken in certain areas. Within an hour it starts to become too dark to use. A couple of hours of off-time is enough to reset it, but I’m thinking that the issue will only get worse over time. It was extremely versatile when I used it full time and it treated me well.