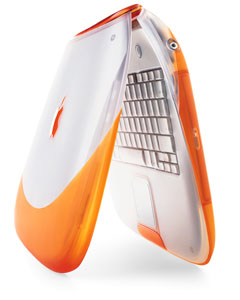 After Steve Jobs returned to Apple in 1996, one of his tasks was to weed through the company’s huge product line and figure out what it should be selling.  At the time Apple was selling a myriad of different laptops, desktops, monitors, printers, and PDAs.  There were too many products, too many different models, and too many confusing configurations.  He slashed the product line, reducing it down to just four categories- Pro Desktop, Pro Laptop, Consumer Desktop, and Consumer Laptop. The idea was that if Apple only focused on four products it could pour its heart and soul into them, making each one a hit. This became know as the four product matrix, a concept that continues to this day. 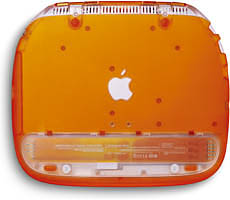 The iBook has a bold design with rounded edges and swooping curves.  Looking from the top, the iBook case tapers out from the back to the front, giving it the shape of a clamshell.  The case is made out of translucent “ice” plastic accented with swooshes of “tangerine” or “blueberry” rubberized plastic around the front, top and sides. The top of the case includes a rather large Apple symbol – larger than any Apple symbol I’ve seen on any of Apple’s other laptops. In fact, the iBook itself is rather large, barely an inch narrower than a 15″  MacBook Pro and over an inch deeper.  It’s also heavy – at 6.7 lbs it weighs almost a pound more than the top-of-the line PowerBook G3 of the time. 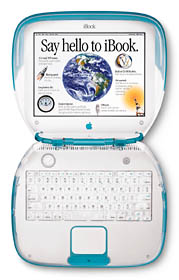 The translucent plastic makes it is easy to see that the case of the iBook has considerable padding around the edges of the screen and the keyboard area. The reason for all of the heft is that the iBook was designed to sustain constant use.  It was marketed to the consumer crowd – parents, students, teachers, schools, kids, casual users – people who wouldn’t necessarily take gentle care of a computer, especially a laptop.  To make the iBook durable, Apple made the case extra large, omitted port door covers, recessed the ports deeply into the case, added rubber buffers around the hard drive, and removed the screen latch entirely –replacing it with a spring loaded mechanism instead. Apple marketed the iBook towards school computer labs and created a special charging station that could charge multiple iBook simultaneously using the two charging contacts on the bottom of the case. 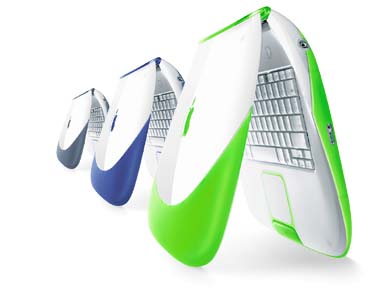 The iBook came in two main models and spanned two revisions.  The original iBook was announced in July 1999.  It was offered in Blueberry and Tangerine colors with a 300 MHz PowerPC G3 processor, 32 MB of RAM, a 3.2 GB hard drive, a tray-loading CD-ROM drive, a 12″ 800 x 600 pixel active matrix LCD display, a 56K modem, one USB port, Ethernet, wireless networking, and a battery rated at six hours of run time. The price was $1,600.  That’s a far cry from the $999 MacBook Air of today, but at the time it was a full $900 less than the lowest-end PowerBook G3.

Seven months later, in February 2000, Apple added a “Special Edition” model to the lineup. For $1,799, the iBook SE boosted the CPU to 366 MHz, doubled the RAM to 64 MB, and nearly doubled the hard drive to 6 GB.  The SE also addressed concerns about the existing model’s bright colors and was offered in Apple’s professional “graphite” color to match the iMac DV SE and the Power Mac G4.

After over a year on the market, the iBook finally got a much-needed upgrade in September of 2000.  The base models were upgraded to 366 MHz Power PC 750 CX (G3) CPUs, which despite their higher clock speeds were only marginally faster than the 300 MHz PowerPC 750 CPUs they replaced. The updated iBook included 64 MB of RAM by default, had an upgraded video card, doubled the video memory to 8 MB, increased the had drive size to 10 GB, added one FireWire port and composite video out, and decreased the price by $100 to $1,499. The new iBooks came in a deeper Indigo blue and almost neon Key Lime green colors.  The Key Lime iBooks are still extremely popular in the used market.  They are rare and can command an upwards of $200 for a unit in good condition.

The SE model was updated at the same time and improved the base model by adding a 466 MHz PowerPC 750cx (G3) and a DVD drive.  The SE was offered in both Graphite and Key Lime colors. The price remained at $1,799.

The iBook sold very well but it did suffer from a fare share of criticisms.  The first set of complaints related to its design. The laptop was smaller near the handle then it was at the front, so when held by the handle its shape mimicked a woman’s bag or purse. Combine that with the bright orange Tangerine or baby blue Blueberry color options and it didn’t seem like the best laptop for a male to be toting around. The color issues were rectified with the introduction of the Graphite and Indigo models.  The handle didn’t go away until the next major revision in 2001.

If the shape of the iBook didn’t look like a purse, then it looked like a toilet seat in many respects.  If you lay it down flat as if you are about to open it, notice that again, the back is more narrow than the front. It looks like a toilet seat. Besides shape, the other major criticism of the iBook (on the outside, at least) was that it was heavy.  We covered that before. But it’s definitely a bit much to be dragging around campus from class to class.

The inside of the iBook wasn’t perfect either. The 300 MHz G3 was adequate for most purposes and was only 33 MHz slower than the low end PowerBook G3 that cost significantly more. What really bothered people was the size of the hard drive (3.2 GB) and the amount of memory (32 MB). Again, this was only a bit less capacity than the low end Powerbook (4 GB hard drive and 64 MB RAM).  Critics also disliked its single USB port, lack of Audio In, and lack of PC card expansion.  But the iBook was designed to be a consumer laptop. In order to shave costs, Apple took out things that most users don’t use.  Apple updated the existing line of iBook models in February 2000 to include 64 MB of RAM and a 6 GB hard drive.  This was the same time they introduced the iBook SE. The other criticisms would be addressed when completely redesigned Dual USB model was released in 2001.

The museum includes an original model (non-Firewire) iBook in Tangerine. It has a 300 MHz processor, a 6 GB hard drive, 160 MB of RAM, and an AirPort card. The battery is in good condition and has an estimated run time of four hours at full charge, which is great for a laptop of its age. It even includes Apple’s famous “Yo-Yo” power adapter. It’s currently running Mac OS 9.0 with a full suite of classic Mac applications and utilities installed including Microsoft Office, Adobe Photoshop, Kaliedoscope, SmoothType, PowerWindows, and even Mac OS Appearance themes such as Hi Tech.

I scored my Tangerine iBook off of eBay for $63 including shipping, which is a really great deal. On average, iBooks go for about $100 before shipping, so I was lucky to get this one.  I’m rather impressed with its condition for the price.  The top of the case is excellent – no major scuffs, cracks, or scratches. The rubberized plastic on the top and sides is free of major scratches and still has grip.  The handle is sturdy and works well. The bottom of the case is in good condition save for some minor scratches and magic marker.  The screen hinges are great – they hold the screen up well and close the laptop with a snap. The only odd thing about my Tangerine is that the inside of the iBook isn’t Tangerine at all – it’s Indigo (a later revision). The area surrounding the trackpad is dark blue as is the trackpad button.  I also think the keyboard is from a Blueberry model.  Although it is large and heavy, I’m impressed with its sturdiness. It feels much sturdier than my PowerBook G3 Lombard (which weighs less).   The keyboard is the same as my Lombard but in “ice” white, and it’s just as comfortable.  My only complaint is that the screen is a bit top heavy and has a tendency to tip the iBook when it’s on your lap.

A fine gallery of images that I took myself. Each image includes additional information if applicable. Images were taken by me, Jason Taylor, unless otherwise noted.