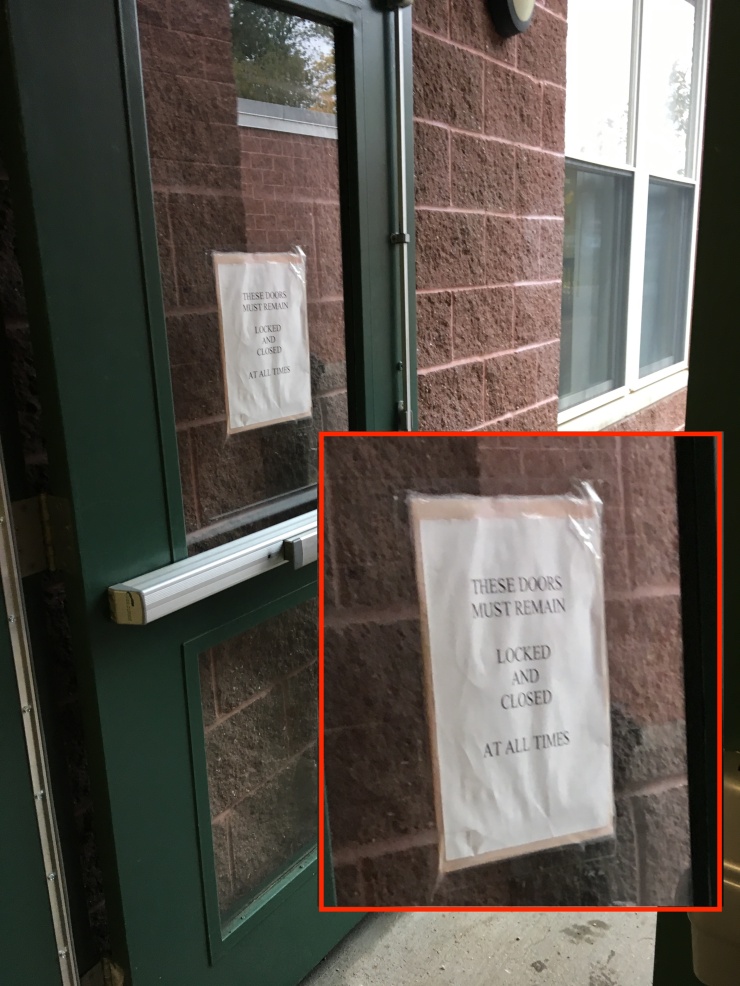 The boys started first grade a couple of weeks ago. We kept them in private kindergarten at their day care last year so this is their first experience with public school. Needless to say there has been some adjustment, mostly on our side…

Let’s start with drop off. Even though there was an open house, we had no idea where to drop the boys off when we got there for the first day. We went to the main entrance and the administrator behind the window listened as we explained our case. She told us that drop off for the before-school program was in the cafeteria via the door on the side of the school. The one that is open until school starts despite having a sign that says “These doors must remain locked and closed at all times”. She said she’d let us in the front this time. Thanks.

Our, more specifically Sally’s, first pick up experience was a bit rough. The boys don’t have after care on Wednesday and Thursday (school started on a Wednesday) so Sally had to pick up. The kids were in a big group outside of the cafeteria door (where we dropped off) and were dismissed by the teacher as parents came to get them. Overall not a bad system but Sally was overwhelmed by the number of students.

Lunch was another fun experience as well. We didn’t know how hot lunch worked so we packed lunch for the first couple of days. We set up a lunch account but didn’t know how the actual process worked and wanted to make sure they still had something to eat. We had to rely on the boys’ description of lunch in order to figure it out. The teacher takes them to the lunch line and helps direct them. Once we knew that we gave it a try on Tuesday. The menu had ham and cheese sandwiches the boys wanted. Adam somehow didn’t get one and got a standard hot lunch, but Zach magically got a sandwich.

It took us a couple of days but we finally figured out that the boys needed to tell the teacher whether they wanted “hot lunch” or “deli” so she could direct them to the correct line.

Snack milk was another snag. The children are offered snack in the morning and milk may be purchased to go with it. We weren’t sure if the purchase came out of the lunch account or if we had to pay for it separately, so we sent the boys with 50 cents each to buy milk. Adam ended up getting his milk but Zach didn’t. He said he gave his money to “the janitor” but never got any milk. We found out that milk is deducted from the lunch account. A week later his lunch account had another 50 cents in it. Go figure.

I figured that school would include homework… I just didn’t realize that it would be for us. Write a story about your child. Fill out the Parent Teacher Group contact form. Sign up for the Fall Plant fundraiser. Send in money for Popcorn Thursdays. Explain how your child will be picked up and dropped off. Tell us interesting facts about your child. Every night we received a new packet (which we appreciated) but every night we had more forms to fill out 🙂

I think the biggest change for us is that we don’t see the teacher in person. When they were in Kindergarten we saw one of their teachers in the morning or afternoon. Now that we don’t see the teacher we only communicate via “the folder”. It’s a fancy plastic folder where graded papers come home on one side and completed homework goes back on another.

The boys have a 6-day schedule where they go to music, gym, library, etc, but because there is a sixth day, the schedule is never consistent. Since they are in different classes they don’t have the same things on the same days. That’s not a big deal except for the library. If they take a book out, they get it for a week then return it the next time they have library. We’ve had a couple of situations where we couldn’t remember when library was due to the 6-day schedule and one day Zach couldn’t find his books because he put them “on the shelf” in the classroom which supposedly would go to the library. We were skeptical but verified at the second open house and Zach was right. Upstanding kid!

The second open house is where we got answers to many of our questions in the form of a neon colored, multi-page packet. It would have been great to send that sucker home before open house, but at least we got the info.

The important thing is that the boys have been really enjoying school so far. Outside of any administrative challenges we have, they are doing well. They like their teachers, like their classes, and are talking about the other children in their classroom. That’s what counts.