Skip to content
I decided recently to purchase a 10.5″ iPad Pro as an upgrade to my four-year-old iPad Air 2. I wanted Pro-level features but the brand-new 11″ model is just too expensive. Scouring eBay was a much better option and I found one quickly – a 256 GB 10.5″ iPad Pro with case and Apple Pencil for $560, less than half the price of an equivalent 11″ version and accessories.  The 10.5″ Pro provides the following upgrades over my Air 2: 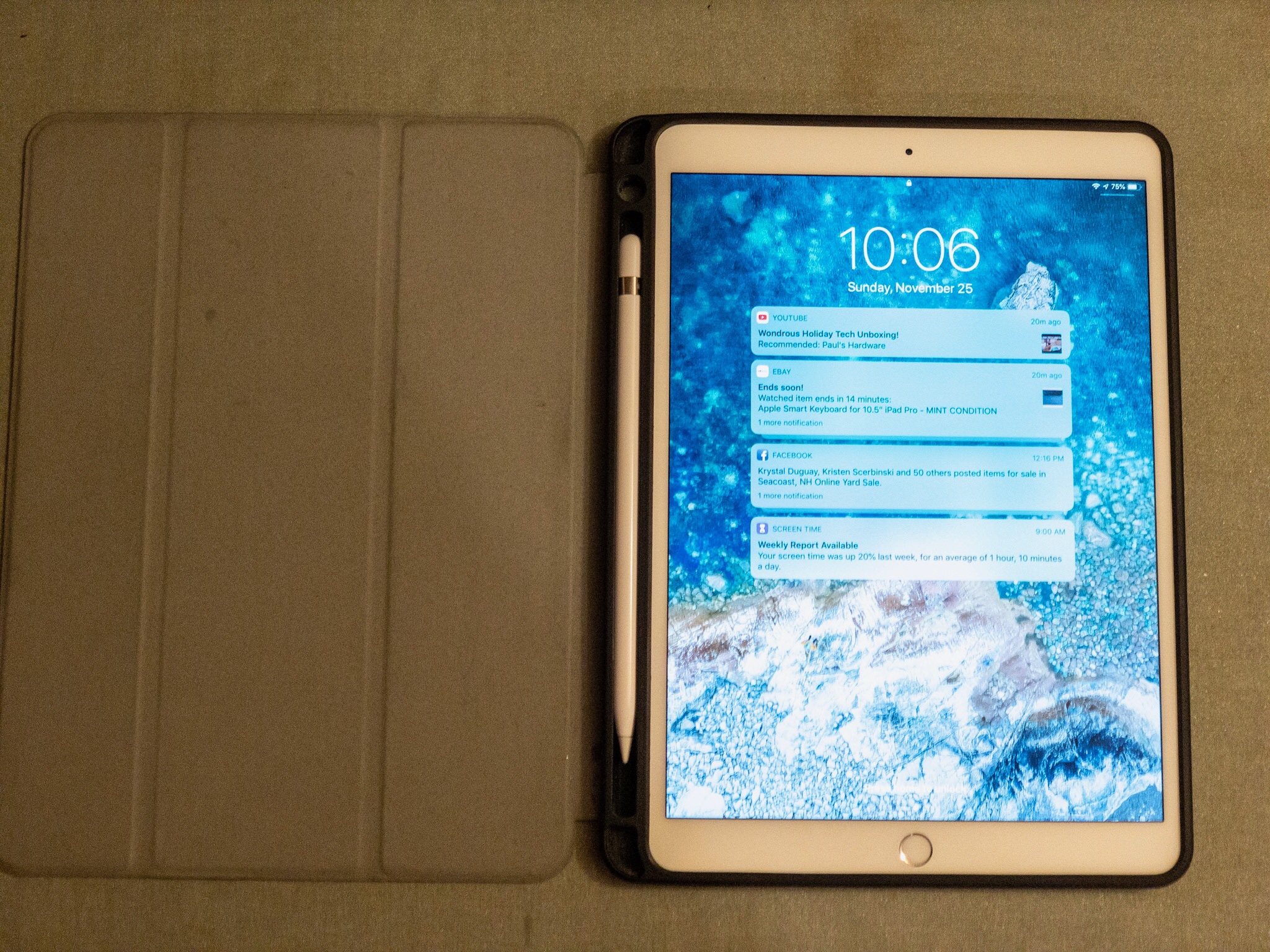 All brand-new iPads are pretty much the same, but used iPads are a different ballgame that warrant additional discussion. When I set out to buy  an iPad I didn’t really care what color it was. If I purchased new I would have chosen Space Gray, but used it didn’t matter. I found a White model that looked great and that’s what I bought. It came with an Apple Pencil and a Ztotop case.  The iPad is in great condition with only a couple of hairline scratches on the screen from regular use. There are no dents or dings in the rest of the case. Touch ID, speakers, buttons, and lightning port all work correctly. It came in an Apple refurbished box but I’m not sure if that’s because it is actually a refurb or that was just the box selected to ship it in. It included a brand-new  power adapter and a thick Amazon Basics Lightning cable that’s longer than Apple’s standard offering. I checked the battery specs and it is still at 98% of its original life with only 12 charge cycles on it. My Air 2 is at about 50% with hundreds of charge cycles. 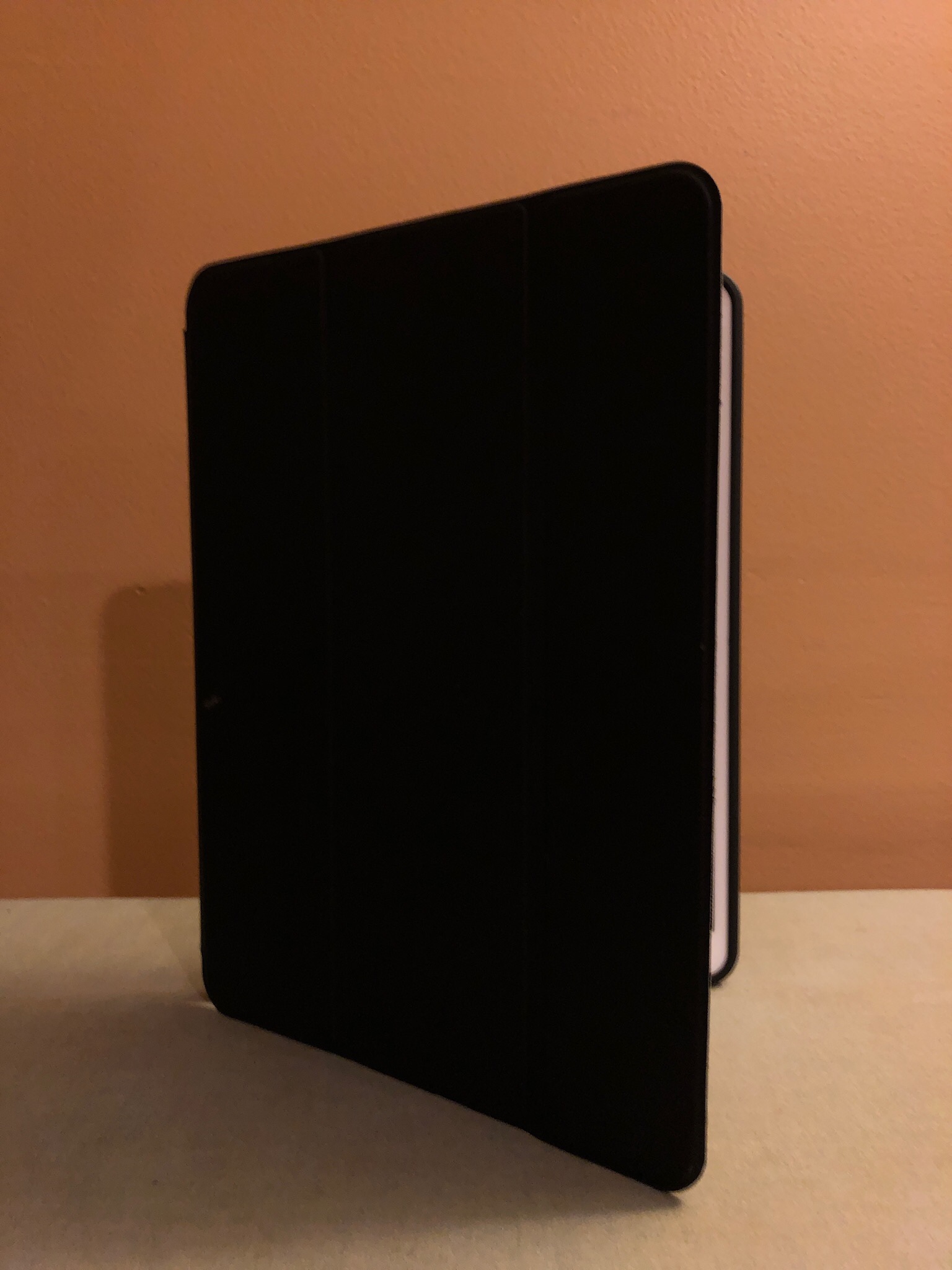 One of the risks of buying a modern iOS device on the used market is that it might be locked by an iCloud account. If the seller cannot access the iCloud account to remove it, the iPad is useless. Forever. This prevents iPads from being stolen and resold. Luckily mine was not locked (or stolen) and  included a fresh install of iOS 12.1.  The pencil came by itself, despite showing a box in the photo. The box and accessories were not promised, so I can’t complain. Since it didn’t include any accessories I don’t have an extra tip for the Pencil and had to purchase an Apple Pencil Lightning adapter separately. The Pencil itself is in great physical condition and works perfectly.

The case is a black tri-fold design that provides front and back coverage, similar to Apple’s case. It has a magnet on the cover that wakes and sleeps the iPad and is made out of a similar material to Apple’s, though it is a bit less tacky and seems like it will hold up better over time. It is slightly thicker than the iPad to provide more protection to the back and to allow heat dissipation when it gets warm, but also includes an Apple Pencil slot on the side. I generally prefer just a cover for my iPad so I can see the back but the pencil slot is really nice. I might investigate a new case in the future but this one is good for now. It’s in great condition with only a minor scuff on the front.

So far I’m very pleased with my new iPad. It is a tiny bit wider and a bit shorter than my Air 2, but it’s close enough to not feel any different in my hands. The screen is amazing though. An extra 176 x 132 pixels and an extra 4/5 of an inch diagonal doesn’t seem like a lot but it really makes the screen feel huge. It also helps that the screen is super-bright with deep colors that always look great under any light. All of the animations and scrolling are buttery smooth – Pro Motion isn’t just something you see, it’s something you feel. It makes the iPad experience so much more fluid and high-end. I love it.  The Apple Pencil is great as well. Apple’s Notes app has basic drawing capabilities and provides a great playground for the Pencil. The tools are limited but it has full pressure support. You can do real sketching and shading with it and it is very realistic. It’s so realistic that it has actually disappointed me by showing me how much of an artist I’m not.  My favorite part about Notes is that it prevents me from drawing with your hands while the Pencil is active, allowing me to rest my palm on the screen without accidentally drawing stuff. It still allows me to select and scroll though, so I’ve still encountered situations where I accidentally select the drawing or bring up the keyboard. I’m also exploring other drawing apps including Paper and Adobe Sketch. I’ve heard that ProCreate is awesome so I’ll probably buy that as well.  From a hardware perspective, the Apple Pencil isn’t as cool as the Pencil 2 with its matte finish, flat edge, and magnetic charging attachment to the iPad, but it’s good enough. Having a slot for it in my case makes it convenient to carry around and the battery is rated for 12 hours and charges in minutes. It can be charged by plugging it into the Lightning port on the iPad Pro, but I don’t love that so I bought an adapter that allows it to plug into a standard lightning cable. It charges on the iPhone dock that I rarely use otherwise.  The rest of the iPad is what I expected. It’s fast, with no stutters, skips, or long loads. I haven’t opened tons of apps at the same time but its 4 GB of memory lets it seamlessly multitask 3 apps at once. I’ve only used up 32 of the 256 GB storage, so there is plenty of space for cached Lightroom photos and movies. The speakers sound awesome; deep and rich bass balanced out by crisp treble. They are way better than my iPad 2’s tinny speakers. The only issue that I’ve run into thus far is that the battery doesn’t last nearly as long as I expect it to. It’s rated for 10 hours but I’ve only been getting about 5 with mixed internet, movie, and Apple Pencil use. It also loses about 10% charge overnight. The battery is supposed to be nearly brand new, so it might be a software problem. I have to fiddle with background apps and perhaps reset it to see if I can fix it. Otherwise the warranty lasts until April (a bonus I did not expect) so I have time to bring it back to Apple.

The 10.5″ model was the right choice for me. The screen is large enough and  clear enough to make a huge difference in my viewing experience, ProMotion feels amazing, performance is significantly improved, and the Pencil is awesome. I may not have the latest and greatest but I saved 50% on a tablet that will easily get me through the next few years. I can invest my savings somewhere else.

One Reply to “My iPad Pro”