One of the easiest ways to identify an old piece of computing equipment is by its color – that yellow / tan / brown that makes you wonder if people in the 70s, 80s, and 90s had any taste. In most cases that color wasn’t actually the color of the hardware when it was new; it’s actually the result of discoloration over time due to sunlight exposure. Many of these machines were actually light tan, beige, or gray in their heyday.

For a long time there was no way to reverse the yellowing. Lucky for me and other retro computing enthusiasts, a formula was developed a little over 10 years ago that could finally do it. It’s called Retr0bright and involves high-concentration hydrogen peroxide, the active ingredient in OxiClean, and UV light.

I learned about it last year and finally made time to try it. I was a little concerned since the hydrogen peroxide has a much higher concentration than what you generally get at a pharmacy (12% vs 3%) and is nothing to mess around with. After reading various recipes and instructions and watching YouTube videos, I was ready.

I followed the standard gel recipe (peroxide, xanthan gum, OxiClean, and vegetable glycerine) and mixed it up. I cut the recipe in half so that I could test the process on small pieces without wasting the peroxide I bought from Amazon. It cost about $27 for a quart and took almost a week to ship so I wanted to be careful. I made  mistake and put less Xanthan gum than intended (1 tsp instead of 1 tbsp) but it still formed a gel, even if it had a snot-like texture.

I made a “UV box” after watching some YouTube videos and deciding it would be a good way to spread the light around. Instead of setting the pieces under a UV light that was out in the open, I lined a plastic tub with tin foil (shiny side out) and created a foam board top with a hole in it for the light to shine into. The foil reflects the light and helps it get all areas of the parts that I’m retr0brighting. I also wrapped each piece in plastic wrap to help evenly distribute the peroxide gel and to reduce the mess.

I chose a few small pieces to test on – the top of an Apple Desktop Bus mouse (angular design), the top of an Apple Desktop Bus Mouse II (teardrop design), a Microsoft Mouse 2.0, and the trim plate of an Apple Keyboard II. Most were severely yellowed; the keyboard being the worst (entire case and all keys were almost brown) and the Microsoft mouse being a close second (it was almost pink). These were good choices because they were small and I had alternates if I ruined them. I also treated half of the power key from the keyboard to show the before and after difference.

I applied the gel and the cling wrap, stuck them in my UV box, and checked on them every couple of hours. After about 6 hours the two Apple mice and the keyboard trim were done. I left the Microsoft mouse and power key in for another two hours. 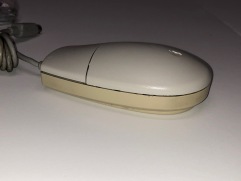 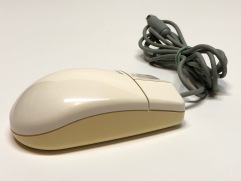 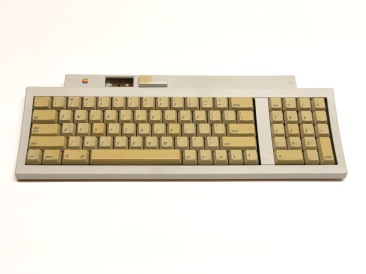 In the end they all came out amazing. The ADB Mouse II almost matches one that is still new in its bag and unexposed to sunlight. The Microsoft mouse almost matches an unopened boxed version I have. The keyboard looks ridiculous with its  gray trim and urine yellow keys. It truly worked and is truly amazing.

There are just a few caveats of which to be aware – you can over-brighten components if you leave them exposed for too long. I’ve watched some youtube videos where people have bleached parts way beyond their original color. The easiest way to control this is to look at the back of the piece being brightened. It usually hasn’t been exposed to the sun and represents the natural color of the plastic. Use it as a guide and take the piece out when the front matches the back.

I’ve also read that Retro0brightening isn’t permanent and pieces will yellow again with exposure to UV light (makes sense). Supposedly applying a clear coat or even armor-all will protect them. I’ve also read that repeated treatments may cause the plastic to become brittle. Some people mess with the recipe, some people use commercial hair bleaching cream, all to different effects. I’m sticking with the standard recipe for now.

Even though I cut the recipe in half I still made way to much mixture to use on my initial parts. I was so impressed with the results that I’m going to use the rest of it on some actual computer cases. I’m going to put them in tonight and see what I get in the morning.

One Reply to “My Retr0bright Experiment”