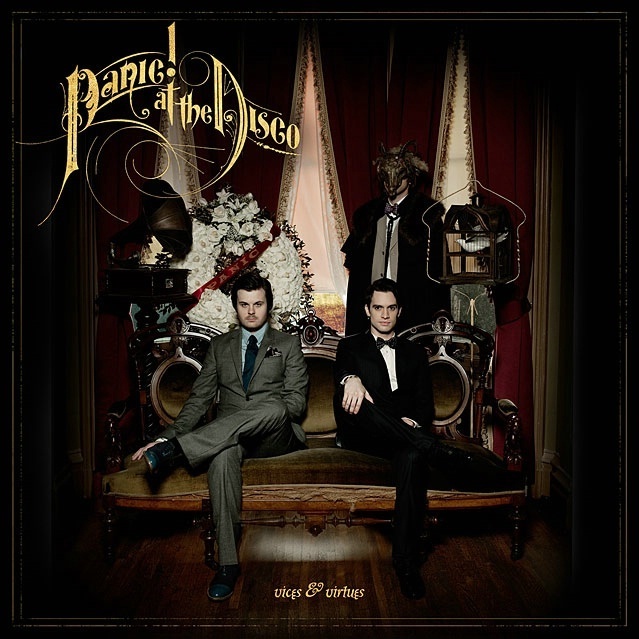 Panic! At The Disco released their new album, Vices & Virtues, this week.  I’m a big Panic! fan (with or without the !) so I naturally preordered it and listened to all of the songs as soon as the album came out.  I’m pretty impressed. If you’re not familiar, Panic! released their first album in 2005: A Fever You Can’t Sweat Out.  It was a mixture of pop synth and strings, complex lyrics, and emo themes.  Sally and I were big fans and it remains to this day one of the only albums on which we know almost every lyric to every song.  They followed it up in 2008 with the highly anticipated Pretty. Odd., which was a huge departure from their previous style.  It was more rock, less emo, and very Beatles.  I feel that their musicality grew for the album but am not a huge fan of it.  I prefer their older stuff.

Since Pretty. Odd. came out I’ve been waiting for their next album, hoping that it would sound a bit more like their first.  When I found out that the band split up and two of its members left to form a new band called The Young Veins, I had hope.  The two that split off were the major force behind the style of Pretty. Odd.  After lots of waiting and hoping, Panic’s third album, Vices & Virtues, doesn’t disappoint.

The album consists of ten medium length songs (an extra three are available on the Deluxe Version) that cover a few different styles.  Strings from their first album are back, mixed with guitars from their second.  Almost all of the songs (even the ballads) are upbeat and easy to listen to. The songs are a great combination of the strengths from their first and second albums combined together.  Unlike their first album, Vices & Virtues includes ballads such as Trade Mistakes and Always, which have soft and delicate lyrics laid atop complex background music.  They are emotional but not boring.  I really like the way they sound.  Other songs on the album are punch and great to dance to including Let’s Kill Tonight , Hurricane, and Nearly Witches (which feels similar to The Only Difference Between Martyrdom and Suicide Is Press Coverage from A Fever).

Overall a fantastic album that I can listen to over and over without getting bored.  Some of the style from their first album mixed with the rock sounds they explored in their second.  I was a little worried when I heard about the breakup but I’m glad the remaining two members stuck together and did something great.