I got into Macs when I was in middle school typing class.  We mostly had green-screened console-driven Apple IIs but there were also five  graphical mouse-able Macs that we rotated through. The Macs were old even for that time, consisting mostly of Mac Classic, LC, and II models.  Some were color, some were black and white, but all of them had windows and icons and games and screen savers. They did cool stuff! And they were beautiful, software and hardware.

I fell in love with the Mac in middle school but couldn’t convince my dad to get one and couldn’t afford one.  That was right around the time that Steve Jobs returned to Apple as an “advisor”, Copland failed, Rhapsody became the future, the clones died, Mac OS 8 arrived, and the powerful G3 processor started toasting guys in bunny suits.  I couldn’t afford a Mac, so I read everything I could.  I checked System 7 books out of the local library, subscribed to Mac World, and even designed and built my own Mac models. 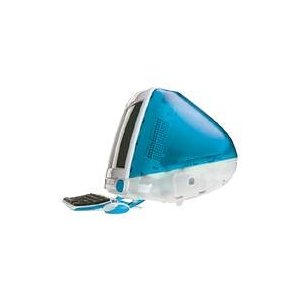 I was impressed by both the software and the hardware.  I appreciated the fine details that Apple scrutinized with each Mac. The gentle curve on the front of the case, the small round inset around the floppy that made it easy to take out, the shape of the ADB and serial ports, the plastics, the layout.  I loved Apple hardware and software without ever getting to use it.  I gazed in awe at the specs and pictures of the beige PowerMac G3 and the original PowerBook G3.  I dreamed about owning a member of the curvy and sexy PowerBook G3 Series with its 14″ screen and hot-swappable drive bays.  I coveted an original iMac – the first Mac whose price was in my reach.

I didn’t get my first Mac, an almost 10-year-old Mac Classic, until I was in high school.  It didn’t have a color screen, couldn’t connect to the internet, and didn’t have a cd-rom drive, but I loved it.  Through high school I followed as Apple released the Blue and White G3, the slot-loading iMac DV, the PowerMac G4, eMac, G4 Cube, iMac G4, and G5. I picked up better Macs along the way – a PowerCenter clone, a PowerBook 170, a PowerBook 1400cs, and then finally my first OS X capable Mac, a Blue and White G3 in college.

I loved following Apple’s operating system strategy as well.  I saw Rhapsody turn into Mac OS X Server, which turned into Mac OS X Developer Preview 1, 2, 3, 4, and Mac OS X Public Beta.  I ogled over the Aqua interface while at the same time appreciating the professional look and feel of Mac OS 8.5, the speed of Mac OS 8.6, and the internet connectivity of Mac OS 9.  I read about the first versions of iPhoto and iMovie, installed Mac OS 10.0, 10.1, and then 10.2 Jaguar on my G3, and used the iTunes store in version 4 to download my first piece of legally acquired music.

College introduced me to the bi-annual scholarship refund check, which bought me a used PowerBook G3 Lombard, brand new 12″ PowerBook G4, and 24″ Intel iMac.  After college I used a tax return and credit card to buy my 27″ iMac.  I’ve always loved Apple’s hardware and software and I love to revisit it.  I keep all the boxes for the products that I can – two iMac boxes, MacBook / MacBook Pro boxes, iPod / iPhone boxes, software boxes, even a PowerBook G3 box for a computer I never owned.  After I traded my Blue and White G3 to a friend for my first iPod I decided that I’d never get rid of my Apple hardware again. I wanted to keep it for a sort of “Mac Museum”.

Up until recently I was content to slowly collect my Macs as I purchases them, looking on eBay now and then for an older model that I’d always wanted to have.  I decided to check Craigslist a couple of weeks ago and I was astonished – people are getting rid of older Macs at a high rate and a high discount over what they cost on eBay.  Granted many of these Macs are 10+ years old and can barely connect to the web let alone do anything else, but they are the Macs that I grew up with – iMacs, PowerMac G3s and G4s, iBooks.  I realized that I can start my Mac Museum right now – and for very little money.

In the past three weeks I’ve picked up four Macs and spent almost nothing.  My first purchase was for a Graphite slot-loading iMac DV SE (circa 2000).  It has a 400 MHz G3 processor, 256 MB RAM, and a 20 GB hard drive.  Whoever owned it must have customized it because it has more RAM and a bigger hard drive than the stock model.  It cost me $35 on Craigslist and I had to go up to Scarborough Maine to get it.  I was excited to pick up one of my all time favorite Macs (I wanted an iMac DV soooo bad) for such a low price but was surprised when I found out there was more.  Included in the sale was a PowerMac G4 tower with a motherboard problem and a PowerMac G3 motherboard to replace it with.  The owner planned to swap out the G4 motherboard for the G3 board and make a sort of Franken-Mac out of it.  Even though the G4 doesn’t work, I still got two pieces of hardware out of it. The G4 gives me a project to work on.  All for $35.

I thought that was fantastic until I found another iMac listing on Craigslist for FREE.  Yup Free. A Blueberry tray loading iMac (circa 1999) with a 333 MHz G3, 64 MB of RAM, and a 6 GB hard drive.  Yeah, it was less powerful than the other iMac that I had but it was FREE.  Speaking of free, I decided to join my local Freecycle group to see if anybody was cleaning a Mac or two out of their attic that they wanted to get rid of. Most of it was baby related stuff or coupons, but today I hit the jackpot – another, yes another graphite iMac DV SE  for FREE. This one was the same as the one that I already had but with the stock 128 MB RAM and 13 GB hard drive, but it was FREE.  I had to pick it up.

So in the past three weeks I’ve picked up four Macs and paid only $35. Yes I had to travel, sometimes to really sketchy places where I thought I’d get mugged or murdered.  But it has been worth it. Plus, stalking Craigslist and Freecycle for deals is kind of fun.  So what am I going to do with them ? Well my first iMac DV is my history machine.  It includes installations of Mac OS 9.22, 10.0, 10.1, 10.2, and 10.3 with all of the updates.  Each OS has some nostalgic games and applications installed (Photoshop 7, MS Office 2001, AppleWorks 6).  If I want to go back in time and party like it was 1999, I can do it on this Mac.  The slot loading iMac runs Mac OS 9.22 and Mac OS X Server 1.2. I’m super excited about this one as OS X Server 1.2 (not to be confused with Mac OS X Server 10.0) was basically the Rhapsody project bundled up and sold to consumers.  It looks like Mac OS 9, but acts like Next Step.  Server applications are developed in the predecessor of Cocoa and “classic” Mac apps are run in a Mac OS 8.6 image.  Mac OS X Server was going to be the next Mac OS.  It could have been.  Instead it became the foundation for the glossy and slick Mac OS X that we know today.

And what about my latest find? Well, even though I already have the same model with more memory and hard drive space, its speakers don’t work for some reason.  The new iMac has a full set of working speakers so I could always do a hard drive and memory transplant of some sort in the future. I’m still looking for more old Macs specifically a non-graphite iMac DV, a Blue and White G3, and a true G4 motherboard for my G4 tower.  But f I find any more free iMacs you can bet I’ll take them.  I’m going to keep scouring Craigslist and Freecycle for deals and we’ll see what I come up with.  If you ever want to reflect on Mac years past, feel free to stop by.