We went blueberry picking in the back yard tonight. Our journey didn’t start that way though. During dinner we noticed some deer in the yard, a pretty normal occurrence around here. This time, however the deer were different: they were bucks. We’ve never had bucks before.

Naturally I had to run outside with my 150 – 600mm lens and get as many shots as I could. One of them was eating crab apples off of a tree in the back yard. I caught it on camera and Sally caught it on video. Pretty cool!

Once the bucks had decided they were done with us the boys rushed outside to pick blueberries off of the bushes in the back yard. I intended to go out there and do something responsible like mow the lawn but decided against it; picking blueberries was so much more fun. Adam and I competed to see who could pick the most blueberries. He won.

After blueberries we explored our trail into the forest. It doesn’t go very far but feels very isolated. You can’t even tell there is a yard 40 steps away. We ended our evening with a family Nerf gun fight. The boys won by collecting all of the darts we shot at them. Clever.

It turned out to be a really nice night outside. I really enjoy spending time as a family out in the back yard. It’s big, beautiful, and provides so much to explore. These are the memories that I cherish. 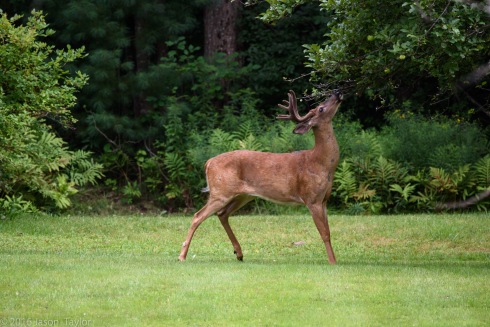 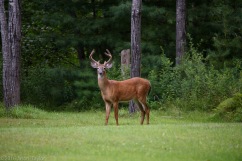