I flew out to Seattle a couple of weeks ago and took the opportunity to take some photos. I wanted to take advantage of the landscape long-exposure skills that I learned in Amsterdam and apply them to another beautiful city. Our hotel was in the Pioneer Square area just three streets up from Pier 55 in Elliot Bay and a short walk from Pike Place Market.

I ventured down to the piers on two consecutive nights trying to catch the sunset and the blue hour. The map above shows my hotel (red pin on the left) and the area I traveled along the pier. It was pretty interesting as there are a number of homeless people in the area, I went alone, and stayed out from about 8 – 11 PM in an unfamiliar place. Despite some discomfort everything was fine and I got some great photos. I’m sharing some here; the full set is at the bottom.

This is the Seattle Great Wheel viewed from a park nearby. I tried to use a slow shutter speed to blur the water in the fountain but the sun was still too bright for it to expose well. I visited it again when the sun was down but I was in a hurry to get back so I didn’t stop for it. I didn’t really want the wheel to be smack in the middle like that but the image is still OK and works better in black and white than in color. 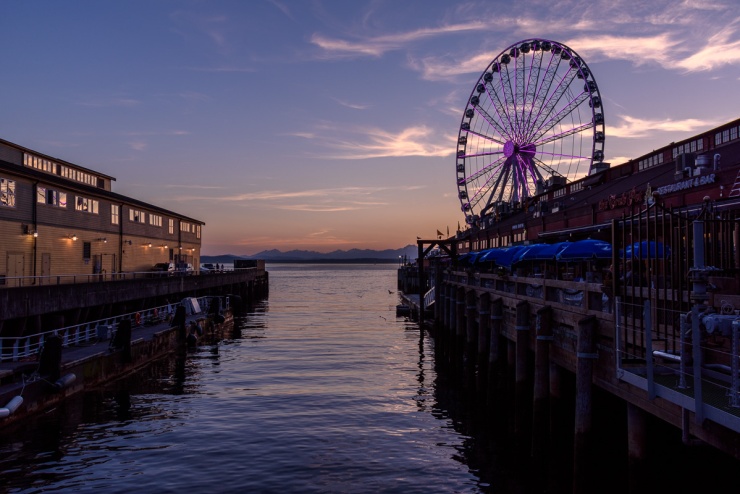 I caught this shot from the pier as the sun was setting. I embellished the colors there a little bit; it wasn’t that purple out but it made a nice image. The building on the left is where we ate dinner that evening.

A close up silhouette of the wheel during sunset. The colors are accurate here. This image makes me feel calm and relaxed. The palmish tree in the background gives it a tropical feel. If there were less light I could have used a slower shutter speed to blur the water. A neutral density filter would have helped here too.

This image came out pretty well. I took it from behind the restaurant we ate at that night. It was dark enough to take a long exposure shot and blur both the water and the wheel. If you look closely on the right you can see a couple standing near the railing and a car in front of a dumpster. #romantic 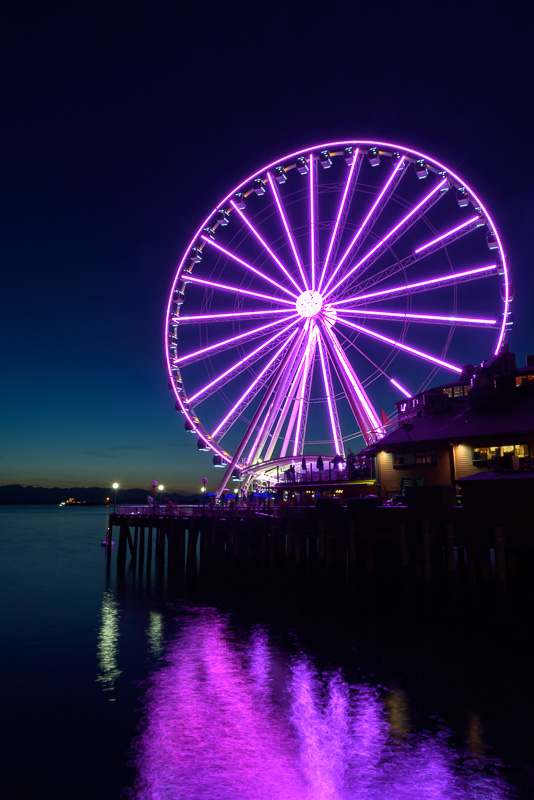 I have a few shots where the wheel is not moving. This one is particularly nice because of the blurred reflection in the water. If only I caught all of the spokes of the wheel when they were lit. This was one of the last images I took before turning in for the night.

I did some research the next day to figure out where to go. I could have gone to one of the parks that overlooks the classic skyline with the Space Needle but I decided to continue exploring the area that was right down the street. I went further down the shoreline toward Pier 66. I caught this on my way back and it turned out really well. It was dark enough for me to try several different long exposures and I spent a great deal of time in Lightroom trying to get the color balance correct. It is a very blue image to balance out the orange lights of the street. I cranked the clarity up in this image to give it that HDR look that you’d see on an HDTV in a store. 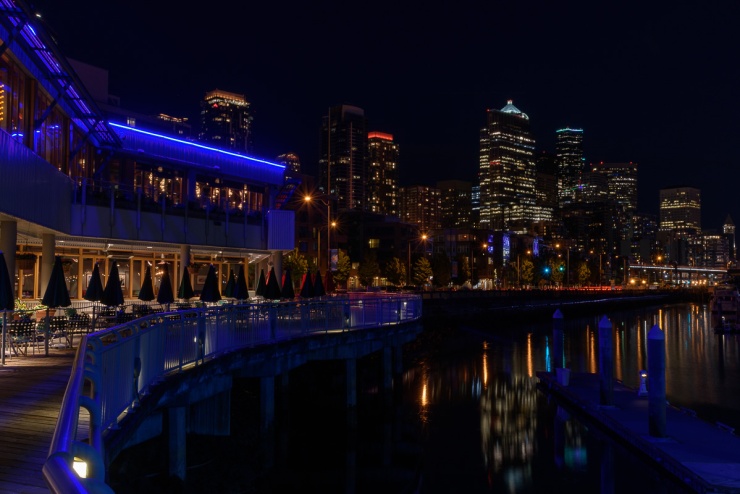 This is a view from the same spot at a different angle. No HDR effects here, just calm water and an empty Anthony’s restaurant.

On my way back I grabbed a shot of some boats docked at the pier. This was a 30 second exposure but it was still pretty dark. I was able to recover a lot of detail because I shoot in RAW format and because my camera sensor has a lot of dynamic range.

As I left the area for the night I snagged a shot of the other side of Anthony’s. The boats from that previous image are to the left. I deliberately enhanced the blues here to make the neon colors stand out.

Larger versions of these photos and more are available in my Flickr gallery below.

One Reply to “Seattle Photo Journal”