After a shorter than expected research and test driving cycle, I bought a new car last Sunday. I drove the Mazda CX-5 and Kia Stinger last Saturday and liked both, but needed to drive one more vehicle: the Stinger’s cousin, the Genesis G70.

All in the Family

When I say cousin, I mean close cousin. The Stinger and G70 use the exact same 365 hp twin turbo V6, have the same powertrain, have the same acceleration, have very similar handling, and have nearly the same feature set in terms of safety, comfort, and tuning. They even have similar prices.

The difference is in the exterior design of the cars and their brand benefits. They look completely different – the Stinger is a hatchback and the G70 is a sedan. The Stinger is about six inches longer which gives it a slightly larger back seat and it’s hatch provides over twice the cargo volume of the G70. The interiors are completely different as well; different designs, different shapes, and different colors/materials that fit an essentially identical feature set.

The other difference is obviously brand. Kia makes good vehicles but it still carries with it a history of budget, low-quality vehicles from the nineties. Genesis is a new brand and is positioned as a luxury marque. It’s won a bunch of awards and is doing well but it has nowhere near the reputation that established brands like Lexus, Infinity, or Acura have, let alone the Germans. As they are both ultimately made by Hyundai, there may be little difference in materials, craftsmanship, or longevity, however if Genesis is positioned to luxury buyers with higher expectations, then perhaps there is a bit more long-term quality baked into the G70. Who knows.

One thing that is verifiably different is the Genesis Experience, a complimentary maintenance and connectivity program. It starts with a branded version of Hyundai Blue Link which provides vehicle diagnostic reports, roadside assistance, remote start with climate control, remote door unlock, and remote map directions. It adds complimentary maintenance (oil changes, filter changes, tire rotations) as well, which matches what Hyundai currently offers on its new vehicles. Genesis adds free navigation map updates, free Sirius traffic, and concierge pickup service for all dealer visits: they will drive a loaner to your home or work, pick up your car, and return it when it’s done. All of this is provided for 3 years / 36,000 miles.

As the nearest Genesis dealer is almost an hour away, the concierge service seemed pretty enticing, even if the reality is a bit rocky. Oddly enough, Kia doesn’t offer 3 years of maintenance like Hyundai, nor does it offer its own Blue Link-style services for remote start or door unlock. The only option for remote start on a Stinger is after-market.

Those factors considered, I was very excited to drive the G70. I liked the way both cars looked but I was leaning towards the G70 due to its sedan profile and interior layout. If I could get the same performance and comfort as the Stinger it would be a done deal. For a similar price I get a similar awesome car with some extra services and connectivity thrown in. Not bad.

My intent was to drive a G70 and then go home and think about it for the rest of the week. I’d mull over whether I really wanted the power of 365 hp or if I could be practical and get the awesome CX-5 that had everything else I wanted. I arrived at the dealer at 10 AM and planned to leave by 11 and be home by lunch.

As soon as I pulled in, a sales guy slipped out of the door. I was on the radar. His name was Zach and he was friendly enough. He asked me what I was looking for and started looking through inventory for it. I was in search of the Prestige model, which is the second model from the top. It has all of the features on my feature list and is about $1,300 less than the top-end Sport model. The sport model adds dark chrome accents (big deal), smoked headlamps and taillamp (big deal), dark wheels (woo hoo), black quilted leather with red stitching (I wanted brown), and adaptive suspension (neat but not essential). All in all, not worth the extra money. So what does Zach bring over for me to test: a Havana Red Sport model.

No worries; the car is the car. I’ll drive the Sport model, and if I like it, I’ll have them find me a Prestige model with the interior color I want. 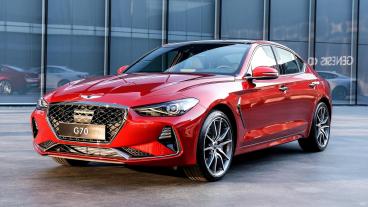 I was immediately impressed with the outside. Havana Red is such a nice color. It’s a crimson color – bright enough to catch your eye but still dark enough to create interesting contrasts in the creases of the body panels. It provides a lot of depth and makes the car immediately recognizable and memorable. The proportions of the G70 are nearly perfect, with lines and window shapes that terminate on the flat front and tail. The front is bold and sporty without looking ridiculous and the back is elegant. It looks like an Aston Martin in the front and a BMW in the back but something unique as a whole. It’s a handsome car in a fantastic color, and even that stupid dark chrome that I didn’t care about, well it looks good too. We’re winning so far.

As I slipped inside the first thing I noticed was that I didn’t hit my head on the door opening like I did in the Stinger. The seat was down and my head wasn’t in the ceiling. In photos I like the layout of the G70 interior better than the Stinger and that carried over to my test drive. I just found it more interesting; there wasn’t as much plain black around the cabin and the controls were laid out in better places. It otherwise has the same feature set.

Though it is definitely smaller inside than my TL, the G70 felt more comfortable to me than the Stinger. It just felt less cramped. The only thing the Stinger interior had over the G70 is that it has vertical door bars that you can grasp to open or close the door. My TL had them and they are a nice place to rest your hand on trips. No such luck in the G70.

I was concerned about trunk space and back seat room as pretty much any G70 review says they are tight. I brought the largest suitcase that we own with me and stuck it in the trunk to make sure it had enough space. It’s smaller than my TL, but not by much since some of my TL’s trunk was taken up by a useless shelf over the AWD hardware. I also adjusted the driver seat for my comfort and then sat behind it and measured my knee room with a tape measure to compare to my TL. It seemed like the boys would fit fine without kicking me to death for the next 5 years.

I took it out on both of the dealer’s test drive routes which included a trip to the gas station followed by two highway runs and some time on regular roads with some bumps in them. The G70 drives in a very similar way to the Stinger but seems to handle just a tiny bit better. The ride is similar as well and it did really well with the bumpy road. It was quieter than my TL and has the same acceleration power as the Stinger that pushes you back in your seat.

As this model had all the bells and whistles, I was able to try many of them out on my test drive. The heads-up display is awesome, showing me my speed and lane keeping assist status. Infotainment is nearly identical to what is in Sally’s Santa Fe, which is a common criticism of Genesis vehicles followed by a compliment that it is a robust, responsive, and easy-to-use. CarPlay worked great! The screen was easy to reach and had a semi-gloss coating that kept it readable in sunlight while making the content pop. It was cool out so I tested the heated steering wheel and the heated seats. Sport mode inflated the side bolsters of my seat so that I wouldn’t slide around during spirited driving. Cool.

By the end of the ride I knew this was the top car on my list. By that time I decided I’d entertain an offer if they made one and I’d go home and think about things if they didn’t. I had already done my financial calculations and was ready for any negotiating I’d need to do.

Sure, I’ll See What it Costs

Of course my sales guy asked me how I felt about it and if I’d be interested in purchasing a G70 if they could make the numbers work. I said yes so that he could start the proceedings. I had already told him that I wanted the trim below with brown leather seats and he assured me that he could find or order one, but I had a feeling that they would offer me a “deal” if I’d take the one I had test driven. I loved the exterior color, didn’t care about the dark trim, and didn’t want the black interior. I really wanted a brown interior, but seeing the red stitching in person made it interesting enough for me to enjoy… as long as I got the price I wanted.

It takes forever to purchase a car. After you have the test drive then you have negotiations and then after you reach a price it takes what seems like an eternity to fill out loan paperwork and decline all of the warranties and add-ons that they offer. I ended up getting $4,000 off of MSRP, a $1,000 rebate, and $8,000 for my trade. I probably could have pushed harder, but I was happy enough. I declined the $3,500 wrap warranty and negotiated the $1,300 tire and rim warranty down to $500. I took out a loan with Saint Mary’s Bank for 2.75%, which was a tad better than the Genesis Finance rate of 2.9%. It wasn’t as good as the 1.9% I had for my TL but rates are what they are right now. Overall it amounts to about $13 more per month and about $800 in interest over the life of the loan.

My test drive was great, my sales guy was fine, and finance was finance. There were definitely some tense moments, but overall it wasn’t any worse than any of my other car-buying experiences.

While a small crossover is definitely more practical, it doesn’t mean the G70 is totally impractical. Yes, it’s a bit smaller than my TL, but it has 4 doors, the kids fit into it, and it can carry luggage around. It has similar or better mileage to my TL and it has all wheel drive. It may not have the same space as a CX-5 but it has enough to get the family out on the weekend. Genesis concierge maintenance has had its bumps but I’ll give it a try. We’ll see how much quality Hyundai put into this car or didn’t in order to hit their price point. Some of this is a bit of an experiment and I’m aware of that. I’m very happy with my choice and we’ll see where it goes from there.