The Pentax *ist DL was my first digital SLR, purchased in 2005 to augment or replace my Pentax *ist. Confused? Cool. In 2003, Pentax released two cameras: their last film-based camera called the *ist and their first digital camera called the *ist D. Nearly same body, two completely different cameras. I bought the *ist as my first autofocus film camera during my senior year of high school in 2003. When the lower-cost *ist DL was released in 2005 I snapped it up since I already had Pentax lenses and was familiar with the body style. Neato, right?

The *ist DL I’m reviewing is actually my original body. By the time I upgraded to a more capable Canon 50D in 2009 I felt that the *ist DL was mostly worthless and I’d be better off keeping it. Glad I did.

As this was an entry-level camera in its day, the specs are pretty basic. It has a 6.1 MP CCD sensor with an APS-C (1.5x) crop factor, 3 point non-selectable auto focus, a 16 zone meter, a dim-but-not-horrible pentamirror viewfinder, a 2.5″ display, and a “fast” 2.8 fps continuous shooting capability. This was long before the time of live view and video recording, there is no sensor cleaning, no image stabilization, focus stacking, or anything like that. It does output JPEG at 3 quality levels as well as RAW and can output to a monitor or TV.

I didn’t shoot RAW when i used my *ist DL as a daily driver so I took the opportunity to use it for this comparison to make it more fair to my D750. I wanted to see if I could produce images that I’d like on this old, 6.1 MP CCD beast. What better way to start than to get some studio shots of my D750 itself in a controlled lighting condition!

Overall I was very impressed, with ISO 200, 400, and 800 shots being useable. ISO 1600 shots worked well with higher noise reduction, and I even made away with a couple at ISO 3200 (the highest it will go) with stronger corrections applied. The images below are at ISO 200, 400, 800, and 1600 with only color noise reduction applied. You can see graininess in the lens of the ISO 1600 image but it is otherwise usable.

I also shot some ISO 3200 images of the cat and applied a lot of noise reduction to them. They are nowhere near my D750’s quality but they are still usable. 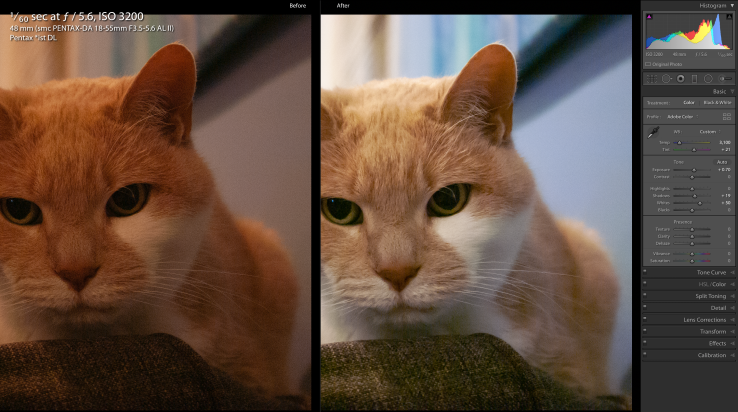 I finished my analysis by taking a few more studio photos of some colored water and then took the camera out the next day to grab some daylight shots at ISO 200 which should represent the best photos it can take. While the kit lenses I own for my Pentax are not nearly as sharp or contrasty as my collection for Nikon, they did produce pretty good images, ones that I would proudly call favorites.

I took advantage of the sub-12″ focusing distance of the 18-55mm lens and grabbed some nice close-up shots; not macro, but not bad. I also took advantage of the 50-200mm lens and the sensor’s 1.5x crop to get some 300mm equivalent shots of a little bird hopping around. I did run into some issues with a lack of image stabilization (in the lenses or the body), slow nature of the lenses (most focal lengths at or above f/5.6), and lack of ISO higher than 3200, and slow autofocus preventing stable focused images in many cases.

The biggest reason I upgraded from my *ist D and switched to Canon was autofocus speed. I could have purchased a newer Pentax with more (and selectable) autofocus points, but I just didn’t trust that focus would be that much faster. I only owned four cheap kit lenses (two from my film *ist and two from my digital) so I wasn’t losing much money by switching over. I could have started processing in RAW to scrape a bit more quality out of my *ist as well, but it was the focus and slow burst speed that really killed me. Now that I own much better cameras it’s fun to take out the *ist and play around with it. If I need something light to tote around maybe it’s not such a bad choice even if it’s 15 years old.